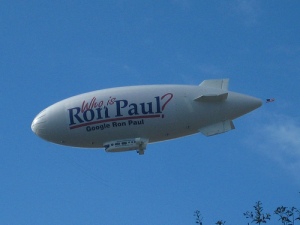 The Campaign for Liberty’s Shadow Republican Convention is moving on up – to the Target Center! I’m so excited for all of us, and if I wasn’t moving so close to the date, you bet I’d be there. I expect our revolution to light up Minnesota (to be clear, that’s a metaphor).

My favorite part of the article linked above was where Paulites were described as “loud and sometimes rowdy, usually young, sign-waving blimp renters.” They might as well have called us ‘wacky, waving, inflatable, arm-flailing tube men.’ I guess there are worse insults…

Whatever his strategy, Dr. Paul moved liberty from an ignored concept to a ridiculed concept. So, according to Schopenhauer, we’re on the map! Now, we must face violent opposition, and finally acceptance. I sure hope I live to see that last one.

P.S. Did you hear Dr. Paul just received a huge advance for his memoirs? Congratulations, Doc; you deserve it.

This article should clear up any misgivings about how private transit companies would expand their networks. If the legal environment was such that companies could homestead land deep underneath others’ property, then I’m sure private enterprises would be building subways in every American city. That’s how it was in New York, back when the largest subway system in the world (after the Tube) was built entirely by private companies.

For the sake of our lungs and lifestyle, get the State out of transit. All they do is suffocate mass transit and build highways through our neighborhoods. Jane Jacobs, you should have been a libertarian.

Here’s an updated map, reflecting boundaries more respectful of ground conditions, the addition of the Free State of Catskill, and the primate cities of each state:

Dream of what could be.

Note: For New Rome, the primate city is a proposed new city, at the present site of Rome, New York, called New Rome. Hopefully, Albany can fade away quietly.

This speech from the Revolution March, reprinted at Lew Rockwell, has coined a meme that will be very useful to us: the permanent party. Charles Goyette uses this term to refer the the Democrats and the Republicans, those two hemispheres of the same criminal mind.

I like it: the Free Independents versus the Permanent Party.

It subtly echoes Mexico’s quiet revolution against the Institutional Revolutionary Party that ruled with an iron fist for 80 years.

Partly due to flaws in our electoral system (see RangeVoting.Org for an explanation), the older generation often thinks in lesser-of-two-evils terms: “if I vote Republican, my kids might die in Iraq and the Federal Government will go bankrupt; if I vote Democrat, my kids might starve on the street and the Federal tax burden will skyrocket. Either way, we’re all going to carry National ID Cards and virtually stripped searched every time we fly a plane.” So, if it’s an older, wealthier male, he votes Republican, and vice versa. Yet, we’re all told time and again to ‘get out the vote.’ Why? What an exercise in pointlessness.

I say if you’re voting for the Permanent Party, it’s a wasted vote. Why cast that symbolic ballot of support when the PP is going to win every election anyway, and they don’t represent your beliefs? Use that one day of energy to write a letter to the editor asking for an electoral reform referendum on the next ballot. Now, that’s worth your time (and you won’t spend any money on gas).

Anyway, the speech linked above is worth a read. As far as I’m concerned, there is no two-party system, only members of the Permanent Party and the rest of us.

I’ve always looked to religion for strategies to spread ideas. I abhor religion, but churches are master vectors of memes. You can look up those words later. My great idea is to settle on one book that so thoroughly explains right from wrong, violence from nonviolence, liberty from slavery, that it could be considered the Torah of the classical liberal world.

Now, there are too many contenders to count, too many august tomes which deserve this honor. But the key to the Ambrahamic religions is that they have one, simple book which explains everything. Of course, there can be many volumes of Talmud to provide deeper insight and to address extant debates within the philosophy, but to the average Joe who has more pressing concerns than politics just needs a Torah, a Bible, to give him a basic understanding of why he must, say, pay for housing instead of voting for housing.

Any readers out there, floating through the blogosphere, please leave suggestions on what you think should be THE book on libertarianism. Not just a great book, but THE book. Then, I’ll make it a poll. We can all pick and choose. And then, who knows? Maybe it will turn into something.

Or maybe it hasn’t yet been written…

Okay, so I was just thinking how surprising it is that American libertarians, a very techy folk, haven’t founded a successful web 2.0 site. So, I googled, and sure enough, one seems to be snowballing:

It’s a great mix: independent (not too dogmatic), supportive of several new and creative initiatives, well put together. So, join up!

Oh, Dr. Paul, you seem to have really laid the foundation of a lasting r3VOLution. Perhaps we are a ‘great’ generation after all.

In case you don’t already visit Lew Rockwell several times a day, here’s a neat article by one of Lew’s cadre of talented and enlightened writers. It’s about how a more plausible Terminator-style plot would turn out, i.e. how it might look if machines took over. My favorite part is realizing that our centralist society is already built for such a thing. Does it really matter if it’s humans or computers pulling the strings?

Lew Rockwell is a great website to casually frequent to get your fill of freedom’s fire when the normal news is too much of a wet blanket. And boy is it ever. The Lew Blog is now reporting that several key Cato Institute members are telling the press they favor a Fannie/Freddie bailout. Another one bites the dust…